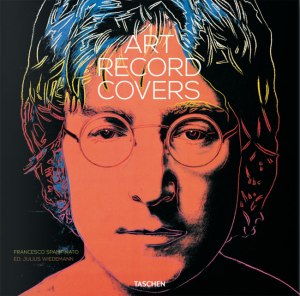 Last month, I reported on the latest effort by the prolific album cover art book editor and author Julius Wiedemann of the famed Taschen publishing house, who had recently announced the details of a new book just released in the U.K. (with buyers in the U.S. having to wait patiently until later in February to get theirs) titled Art Record Covers that, according to the press announcement, “showcases an alphabetized collection of artists’ record covers from the 1950s to today. Highlighting the relationship between image-making and music production, the anthology presents 500 covers and records by visual artists including Jean-Michel Basquiat, Keith Haring, Ed Ruscha and many more.”

The new book was assembled by “contemporary art and visual culture historian, writer and artist” Francesco Spampinato who, in addition to be an art professor at the prestigious Rhode Island School of Design, has authored two other recent books on design, including 2015’s Can You Hear Me? Music Labels by Visual Artists, published in 2015 by Onomatopee (Eindhoven, NL).

While some of you may recall that I’ve been working on a book based on the interviews I’ve done over the years with many of the best-known album art creators (due out later this year, I’m hoping), I am the first to admit that, as I’m not a trained art historian, I have always lobbied for the inclusion of album cover art/artists in the bigger ongoing discussion about the relationship between music and the visual arts, so it is inspiring to read books written by educators that further that conversation. Based on what I’d read and seen on this new book, I knew that I’d need to work to get a more-detailed look at the book and its contents, and the always-interesting Mr. Wiedemann was kind enough to work with me on a special feature for the ACHOF that I’m presenting to you today.

END_OF_DOCUMENT_TOKEN_TO_BE_REPLACED

Album Cover Art and Artist News Summary for the Month of January, 2017

Posted on February 1, 2017 | Comments Off on Album Cover Art and Artist News Summary for the Month of January, 2017

Greetings from Chicagoland. The other night, I went to my first local Grammy chapter event – something dubbed a “member celebration” (due to the fact that there are scores of Grammy nominees living in the area) and held in a ballroom at a local landmark – the Chicago Athletic Club on Michigan Ave. Having moved here from Portland and having participated on occasion in local events sponsored there by the Pacific NW chapter (based in Seattle, about 3 hours away), it was great to see an event so well-attended and easy-to-get-to at the same time. The highlight for me that evening was a performance by the Chicago Children’s Choir, a group of young people from all over the city who, when assembled and lead by a talented director, lifted spirits with an impressive set. It would also be inspiring to be able to work with both this and other local professional organizations to promote the talents of people that contribute great designs to the music industry, so wish me luck in my efforts.

END_OF_DOCUMENT_TOKEN_TO_BE_REPLACED

Comments Off on Album Cover Art and Artist News Summary for the Month of January, 2017