Today’s Interview Topic – the making of the photographs included in the series titled “Deja Vu”, featuring the portraits of many of the best-known photographers from the world of album cover imagery. 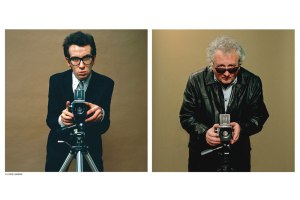 Whenever I view a photograph these days that was used on a well-known record cover – particularly, an album I remember buying from one of my favorite record shops (oh, so long ago), I tend to first recall my initial reaction to the image overall (i.e., what was it about the photo that pushed my “pause” button while sifting through the record bins) before moving on to the details found upon further exploration and assessment of the final shot used. I often wondered where the photos were taken, who the people were that you might find in the backgrounds and what sort of photo-trickery was used to create a number of the impossible scenes that were created for our enjoyment well before the availability of the photo-manipulation tools used most-frequently by photographers and art directors today. Getting these answers was one of the main reasons I began contacting the people responsible for a number of these images to ask for these details directly, resulting in the nearly 100 interviews I’ve done and shared with you over the past 7-8 years.

While I know that many of you have shared the same thoughts and fascinations about “the making of” many of your favorite covers, I have never before seen a case where someone who displayed the same interest in album cover-making as I have embarking on a project where, using her talents as a designer and photographer, she worked to “get inside” both the production processes and the minds of the people who’d taken many of her own favorite covers. Using her professional relationships with photographers including Anton Corbijn, Chris Gabrin, Gered Mankowitz, Terry O’Neill and others, U.K.-based photographer Emilie Sandy collaborated with these talented people several years back to have them re-create (to the best of their ability) and/or re-interpret some of their best-known album covers. The resulting series of images was called “Deja Vu” and, I think you’ll agree, they certainly work to shed a light on the subjects, their approaches towards making memorable album cover images and how they have ultimately influenced a young photographer’s career and her own approach to shooting photos that will endure. END_OF_DOCUMENT_TOKEN_TO_BE_REPLACED