END_OF_DOCUMENT_TOKEN_TO_BE_REPLACED

Interview with artist Dave McMacken on the making of the cover of the Frank Zappa album titled Over-Nite Sensation, released in 1973 on DiscReet Records. 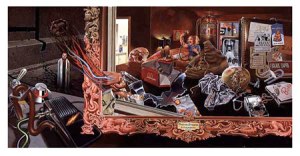 I credit my brother Bob for introducing me to Frank Zappa. Forty years ago this year, while I was engrossed in my Black Sabbath, Mahavishnu Orchestra and Santana albums, Bob was happy to memorize every word of his George Carlin and Frank Zappa records and, since we had to share the stereo (located on top of my mother’s player piano), I listened (and learned) while Bob would play Over-Nite Sensation almost endlessly.

I’d always been attracted to bands whose lyrics included doses of comedy and nod-nod wink-wink innuendo (beginning with The Kinks and, later on, The Sex Pistols), but this Zappa album was the first one where I just could not believe that I was hearing what I was hearing (and, at the same time, praying that my Mom was not listening closely as well). He goofed on TV programmers, Montana ranchers and sex, but these parodies were laid on top of really impressive musical underpinnings – the Mothers band augmented by virtuosos including George Duke on keyboards and Jon-Luc Ponty on violin – and so the total package resonated with me in ways unlike anything I’d heard before.