Posted on March 1, 2022 | Comments Off on Album Cover Hall of Fame News Update and Link Summary for March, 2022

After nearly forgetting that February is a short month and that I had 3-4 fewer days to prep this monthly summary, something sparked inside my head and I realized that I had to get things together, so what you’re reading today comes as the result of a couple of self-inflicted bonks to the sides of my head. As a result, I’m hoping that everything is in order and makes sense since, after reviewing all of the materials I’d gathered, there seems to be a lot going on world-wide that should be of interest to fans of album cover art and the people that make it, so get ready for a fairly-lengthy summary article.

END_OF_DOCUMENT_TOKEN_TO_BE_REPLACED

Comments Off on Album Cover Hall of Fame News Update and Link Summary for March, 2022

Posted on August 30, 2019 | Comments Off on Album Cover Hall of Fame News Update and Summary – End of August/September, 2019 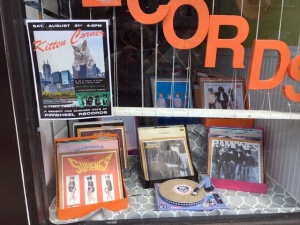 It’s almost Labor Day weekend again, which most of us use to mark the end of Summer while some of us cling with every fiber of our being to hold on to the season’s last vestiges. We did use a nice day recently to tour Chicago’s Pilsen neighborhood (visiting the National Museum of Mexican Art, which sports one of the best museum stores I’ve ever been to) and, while strolling down W. 18th Street after a dessert stop at Creperia Nuevo Leon, we came upon Pinwheel Records, a place that was advertising an upcoming fund-raiser for a local kitten support group with a window display of well-known album covers that had been “kittenized” (see photo). This reminded me of just how important album cover imagery is in the promotion of music products and in building lasting memories for fans and consumers of these products. Great new examples of these can be found in the 200+ submissions we judges had the opportunity to see and review for this year’s Making Vinyl Packaging Awards (see item on this competition, which follows) and also in the many shows, articles and more you can read about (if you give me a few minutes of your time) by scrolling through this month’s easy-to-digest run-down of all of the album cover artist/art-related news I think might be worth your time investigating:

END_OF_DOCUMENT_TOKEN_TO_BE_REPLACED

Comments Off on Album Cover Hall of Fame News Update and Summary – End of August/September, 2019