a) I’m saddened to report that, after a long battle with ALS, the great rock photographer Baron Wolman died at his home in Santa Fe, New Mexico on November 2, 2020 at the age of 83.

Born in June, 1937 in Bexley/Columbus, OH and growing up in the Columbus, OH area where his father ran a sheet metal company and his mother worked as a volunteer for a number of local Jewish organizations, Baron Wolman graduated from Bexley High School in 1955 and went on to graduate from Northwestern University in Chicago, IL in 1959 with a degree in philosophy. In 1961, after enlisting in the Army, learning the German language and counter-intelligence skills and then being stationed in Germany, he photographed President Kennedy during his tour of the newly-erected Berlin Wall and contacted his hometown paper, The Columbus Dispatch, to see if they’d be interested in the photos. After the paper agreed (and paid him $50 for his work as a photo-journalist), Wolman decided that this would be a fine way to make a living – turning a hobby and a passion for photography into a career.

After his discharge from the Army, Baron returned to the U.S. and moved first to Los Angeles, eventually finding his way up the coast and settling in San Francisco where he photographed some of the acts driving the burgeoning music scene there. Happy that someone – anyone! – was paying attention to them, the bands gave him free access to their performances. In April of 1967, Wolman was introduced to a young Berkeley student/writer by the name of Jann Wenner who, with local music writer Ralph Gleason, was going to launch a new music magazine called Rolling Stone. Wenner was hoping that Baron would join him in that effort, and Wolman agreed, working for free in exchange for being able to retain ownership of all the photos he’d take for the magazine. The deal was struck on those terms and, for the next three years, Wolman’s access to the local music venues and acts resulted in a treasure trove of photographs for the magazine of the acts that would become the “who’s who” of the late-60s music scene – the Grateful Dead, Santana, the Doors, Frank Zappa, Janis Joplin and visiting acts such as Bob Dylan, Pink Floyd, Iggy & The Stooges and the Rolling Stones. Baron also covered the first Woodstock Music Festival in 1969 and was responsible for many well-known images of that event.

Wolman left Rolling Stone in 1970 to launch his own SF-based street fashion magazine titled Rags and, after publishing 13 issues, left to learn every aspect of aerial landscape photography. From that effort, he published two books of photographs on his own “Squarebooks” imprint – California From the Air: The Golden Coast in 1981 and The Holy Land: Israel From the Air in 1987. In 1975, after spending an entire season with football’s Oakland Raiders, he published another photo essay book titled Oakland Raiders: The Good Guys. He also moved from San Francisco to Marin County, doing free-lance work for magazines including Esquire and Vogue.

In 1992, he published Classic Rock & Other Rollers/Photo Portfolio, a collection of 123 color and black & white photographs of his favorite rock music subjects. In 2001, Wolman moved to Santa Fe, New Mexico, where he continues to work (contributing to a vast array of photo books and photo postcard books) and publish books of essays and photographs such as 2005’s Visions of Santa Fe: Photographers See The City Different. In 2011, Wolman released Baron Wolman: Every Picture Tells A Story, the Rolling Stone Years, a retrospective collection that tells the tale of his time at Rolling Stone magazine, offering stories about “the making of” many of his best-known images.

Also in 2011, Wolman received a VIP Award during Classic Rock Magazine’s “Roll of Honour” Awards show from fellow photographer Ross Halfin, during which he smashed a camera on stage in homage to one of his earliest subject, guitarist Pete Townshend of The Who.

Baron’s photos are exhibited in galleries and in solo and group exhibitions around the world. Notable shows include Who Shot Rock & Roll, which launched its national tour at the Brooklyn Museum of Art in 2009; a number of gallery and museum shows in support of the aforementioned 2011 release of his book The Rolling Stone Years,   The Groupies (photos of famous/infamous “entourage” members) in London in October, 2012; and On Assignment: Woodstock Photographs by Rolling Stone Photographer Baron Wolman at the Bethel Woods Center Museum in NY in April, 2013.

In 2018, as a Kickstarter project, Baron and archivist/editor Dagon James produced a 98-page book built around Wolman’s entire portfolio of shots he’d taken of the late musician Jimi Hendrix titled Jimi Hendrix, 1968-1970 and, in late 2019, Baron brought his “Backstage Pass” travelling show to the Museum of the Gulf Coast in Port Arthur, TX. This museum is perhaps best-known to rock music fans for its collection of memorabilia featuring their hometown heroine Janis Joplin, along with several of Wolman’s better-known images of the singer and her band, such as the one found on the back cover (though originally intended for the front) of Big Brother and the Holding Company’s Cheap Thrills record.

Back in August, 2017, I had the chance to tour the “Bill Graham and the Rock & Roll Revolution” event at the Illinois Holocaust Museum in Skokie, IL.  As part of the ongoing series of events and other activities that the museum put on in support of their show, on Thursday, August 17th, they staged a special event that, as both a fan of rock and roll photography and a regular reader of Rolling Stone Magazine over the past 50 years (!!), was truly a special opportunity and something I just had to attend – a presentation by and book-signing event titled “The Rolling Stone Years” by none other than Mr. Wolman, the magazine’s first photographer and a man who has captured scores of photos that have helped illustrate Rock’s “golden ages”. 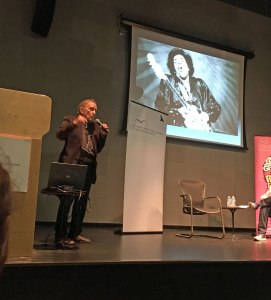 The evening’s opening discussion was lead by Jason Marck, a local radio personality, who provided the photographer’s introduction and an occasional question during Wolman’s hour-long slide presentation. Even though Baron was suffering a bit from a sore throat caused by the after-effects of  throat surgery, it did little to curb his enthusiasm to share some of the stories behind a nice selection of his best-known photographs and more info on his own personal story, including his early career as a photographer in the military (BTW, the first photo he sold was of the Berlin Wall while stationed in Germany) and, after returning to the States and landing in the San Francisco Bay area, his introductions to both Jann Wenner at the fledgling Rolling Stone publication and rock impresario Bill Graham, the man who provided Wolman with nearly un-fettered access to his venues and the acts that played there (including Janis Joplin, Jimi Hendrix, Quicksilver Messenger Service, Bob Dylan & The Band, Santana and, of course, the Grateful Dead).

With influences including the great photographers Richard Avedon and Irving Penn, it was Wolman’s own keen eye and keen interest in all of the goings on behind the scenes of the events and personalities he covered (his fascination with 1960s-era “groupies” was shared later in a critically-acclaimed photo book of his on the subject) that keeps music/art fans yearning to add selections from Wolman’s fine art print portfolio to their own collections. There were number of those fans in the audience that night, and they streamed out after the final Q&A session to both meet the photographer at the book-signing table and, perhaps, grab a photo or two with their hero. The museum was offering those in attendance the opportunity to take home, as a bonus for joining/extending their memberships, a specially-created book featuring items from the Graham exhibition and I’m quite certain that a number of those books went home with their new owners featuring the signature of the man of the hour, the talented Mr. Wolman.

After the show and my own meet-and-greet, Baron put me in touch with the Art Director who he’d worked with to create the special book done for the show – the head of design at the Ogilvy & Mather agency in Chicago, Gabriel Usadel – and he was kind enough to share a bit of info about what it was like to work with Wolman (as it turns out, Gabe’s father used to own a record store, and so he grew up with a love and fascination about album covers and the people who make them. It’s a small-but-passionate group of people, us album cover fans!

To learn more about Baron Wolman and his work, please visit his website at http://www.fotobaron.com/

b) IT’S VOTING TIME (What, again?) – While some of you might be tired of voting, it is still the duty of album cover art fans world-wide to take a look at the 50 nominees (who’ve created an amazing array of images for LPs and 12” singles released during the year) for this year’s Best Art Vinyl 2020 Awards and select your three favorites, with the winners being selected and trophies (plaques?) awarded this coming January.

Of course, the results will be featured here – very eager to see who you all like best.

To view the previous winners of this prestigious award, click on over to the Art Vinyl site at https://artvinyl.com/lp-records-displayed-as-artwork-prize/

Unless otherwise noted, all text and images included in this article are Copyright 2020 Mike Goldstein and AlbumCoverHallofFame.com – All Rights Reserved. All of trade names mentioned in these summaries are the properties of their respective owners and are used for reference only.