We made it! It was rather exciting to step out into a -54 F wind chill (-21 F actual temp) yesterday morning here on Chicago’s North Shore – it’s amazing how fast your eyeglasses freeze to your nose. 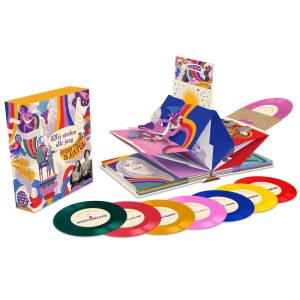 I’ll Be Your Girl – The Decemberists

In any case, the extra time indoors allowed me to finish writing and posting my recent interview with Jeri Heiden and Glen Nakasako from SMOG Design in LA (where it is NOT anywhere near zero degrees) about their award-winning (and upcoming Grammy Award-nominated) design for the fantasy-inspired box set for The Decemberists’ I’ll Be Your Girl (featuring the artwork of long-time band illustrator Carson Ellis), so if you’d like to learn more about the work that went into creating this truly-impressive package, click on over to https://albumcoverhalloffame.wordpress.com/2019/01/31/2270-ill-be-your-girl-the-decemberists/

In addition to being the time when the announcements will be made about who won this year’s Grammy Awards in the packaging categories (stay tuned here for the announcements as they’re made a week from Sunday), early February is also notable for the launches of two new album cover-oriented shows –  the first (beginning tomorrow, February 2nd at the Jordan Schnitzer Museum at the University of Oregon in Eugene) that highlights LatinX design and its influence on popular culture via album cover arts from the 1930s through the 1990s. The show, Visual Clave, was put together by two experts in the field – UO Professor of Anthropology, Folklore and Popular Culture Philip W. Scher and noted researcher, author and artist/musician Pablo E. Yglesias, whose 2005 book Cocinando: 50 Years of Latin Album Cover Art provides the substructure to this exhibition. Visual Clave is on view from Saturday, Feb. 2 to April 21  https://jsma.uoregon.edu/visualclave. The local Eugene Register-Guard has a nice write-up on the new show at https://www.registerguard.com/entertainmentlife/20190131/exploration-of-latinx-art-and-music

Soon after, beginning on February 9th at the Morrison Hotel Gallery inside the Sunset Marquis Hotel in West Hollywood, CA, fans of album art can treat themselves with a visit to a new show called A Grammy Celebration: Covers, which will also be enhanced by a tandem special exhibit honoring the career of the late, great Aretha Franklin. According to the gallery’s director Casey Fannin-Kaplan, “This year we wanted to pay tribute to all of the photographers whose hard work made it on the iconic album covers we all know and love. The album art is so essential to the music—you can’t have one memory without the other. Our exhibition will juxtapose the original photograph next to the album cover it was used for, so get ready to go down memory lane!”

Photographers whose works will be on display include Joels Bernstein and Brodsky, Michael Cooper, Henry Diltz, Duffy, Lynn Goldsmith, Bob Gruen, Jonathan Mannion, Mick Rock, Ethan Russell, Norman Seeff and M. Sukita, among many other noted shooters. The team from The Vinyl District has posted a nice intro to the show at http://www.thevinyldistrict.com/storefront/2019/01/tvd-radar-morrison-hotel-gallery-celebrates-the-grammys-with-iconic-album-covers-and-a-tribute-to-the-queen-of-soul/

Unless otherwise noted, all text and images included in this article are Copyright 2019 Mike Goldstein and AlbumCoverHallofFame.com – All Rights Reserved. All of trade names mentioned in these summaries are the properties of their respective owners and are used for reference only.