This album cover fan collection is going to be a bit different than most of the articles in this series, mainly due to the fact that the featured participant, Gary J. Freiberg, has a unique history in the field. Gary wears a number of different record cover-related hats – he’s a vinyl preservationist, an organizer of vinyl record-related events (including Vinyl Record Day, celebrated each August 12 and now in its 13th year) and the co-inventor of the very popular Rock Art Picture Show Record Album Frame. I met Gary when I had my gallery and, based on his encyclopedic knowledge of all things album cover, I knew that he’d be an important addition to the Voting Panel of the ACHOF, which he’s been a part of since our inception in 2012.

The mission statement of the Vinyl Record Day organization – a non-profit, 501(C)3 established in 2002 – focuses on three important aspects related to the appreciation of recorded music: 1) Establishing a day, nationally-recognized, for music fans of all types to enjoy their favorite music; 2) maintaining the value, presence and growth of the vinyl record medium and 3) “Preservation of the cultural influences, the recordings and the cover art of vinyl records” and the people who produce them. With that in mind, when I asked Gary to give us a glimpse into his own collection, he suggested that, since preservation was an important aspect of his work and passion for music, it might make more sense for him to highlight some of the actual album covers (vs. art prints) he’s collected and appreciated that were created by “the father of Album Cover Art” – Alex Steinweiss. As he put it, he’s a student of the evolution of the art form, starting with Steinweiss and his covers for Columbia Records in the late 1930s (and his invention of cardboard sleeve-based packaging in 1948), and so he thought that it was important to focus our attention of the talents of the person most-credited with adding an entire new visual dimension to the promotion of recorded music. How can I argue with a premise like that?

Gary was fortunate enough to have known Mr. Steinweiss (before his death in 2011) and so we’ll use the story of his initial meeting with him, along with a biography of the famed designer that Gary’s put together for us, to wrap a display of Steinweiss-produced album covers you’ll find included throughout this article. I think that, for those of you who weren’t familiar with these trend-setting works, you’ll see just how influential these images have been on record cover design over the past 70+ years, while those who’ve seen his work before will appreciate the retrospective. And so, in his own words, let’s take a stroll through a selection of Gary Freiberg’s favorite Steinweiss album covers…

Alex Steinweiss, in a cell-phone photo Gary took during his visit

I met Alex Steinweiss, the father of Album Cover Art, in 2003 when I organized the second annual Vinyl Record Day, an event and organization that I founded in 2002. I had been in contact with him prior to our meeting and was very lucky that the event I organized in San Luis Obispo coincided with Alex and his wife Blanche being flown from their home in Sarosota, Florida to Los Angeles by the International Recording Media Association for their first annual ALEX Award event with these awards, as you can surmise, named in honor of this trail-blazing designer. I had the honor of driving to LA, picking Alex and Blanche up and driving them the three and a half hours north to San Luis Obispo. We had the event the next day, with Alex presenting a seminar at the city’s art gallery that quite conveniently, bordered Mission Plaza, where the event was held. The following day, we drove along the coast and discussed album cover art and did not return to LA until the next morning.

He was a tremendous man outside of his art work. He was nothing but a gentleman, humble and eager to talk of art, and one of the finest people I ever had the honor of knowing. He told me that he and Blanche met in a rather touching way when she was fourteen and he was sixteen. She was being dragged on the sand near New York’s Coney Island by several boys, and Alex came rushing to her aid, challenging the others boys to let her go or they would have to face him. Falling head over heels in love, they married young and were together until Blanche’s passing in 2010, married nearly 70 years. I clearly remember that, when we stopped for lunch heading back to LA, the held hands while descending the stairs of the restaurant.

He had graduated from the Parsons School of Design in New York and was soon hired by Columbia Records as the first graphic artist for the company. While originally his duties were to create promotional materials for the new company, it was his instigation that would end up creating a new art form. Initially, the “bean counters” – as he called them – resisted his suggestion to have colorful album cover art in place of the plain brown wrappers that primarily promoted the record company’s brand and not the musical artist. Finally relenting – to let the new guy have his way – he was allowed to try his new idea out on just a few records they were willing to experiment with. His first cover art illustrations were based primarily on his knowledge of German poster art and though his album cover art images were hand-drawn illustrations, he used a photograph of a theater marquee on Broadway to create the first album cover, which turned out to be particularly innovative as photography did not become technically feasible for mass reproduction until the late 1950’s. His instincts were proven right when one of the records, a Beethoven recording, showed an 800% increase in sales, and so the practice of creating real album cover art was born.

The purpose then and now of the art form has always been marketing, but when his cover art style became well-established and broadly-recognized, Steinweiss was the first cover artist who signed his work as if it were “fine art”. Viewers of his covers will note that, on a majority of the countless number of album covers he created, his last name is found along the edge of the art work. He also created the “Steinweiss” font, recognizable for the unique swirl of the letters.

His innovations did not end with his addition of striking cover art to paper record sleeves – Alex Steinweiss also invented the cardboard record jacket about nine years later. However, this idea was, according to the story he told me, stolen by his brother in law.

Steinweiss also created cover art under the name “Pierdra Blanca”. He did so to have artistic freedom, and under this pseudonym his art work was edgier, bustling with more energy and on the threshold of what was acceptable in public art at the time. For example, his Seven Dreams cover art for a Gordon Jenkins instrumental album is filled with obscure symbols, nudity and hidden messages. This particular piece is perhaps the first album cover that wasn’t obvious, and searching the art work will reveal something new every time, predating by years the era when owners would search Beatle covers for subliminal images. It is very progressive, with a breast-shaped clock image – obscure but, in my eye, that is definitely a nipple at the end – and there are hidden nude figures among crosses and other objects in the body of the art work. As I said before, this alter ego enabled him to do things “the real Steinweiss” could not do. 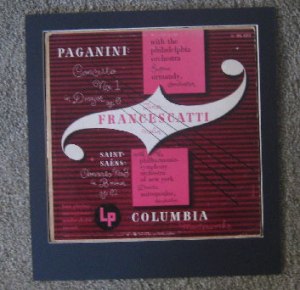 For this article, I could have selected any Steinweiss as a favorite. If there was any particular reason that I chose these, it was for the color scheme and to be able to include a broad representation of the master’s work. I chose the Edward Morrow cover for its historical representations of those depicted on the cover, otherwise, my intent was illustrate his diverse color schemes and, ultimately, to convey the expanse of Alex’s genius. 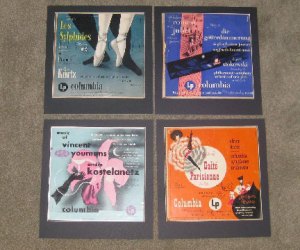 About today’s Featured Album Cover Fan, Gary Freiberg (in his own words) –

I co-invented the Record Album Frame and launched the Rock Art Picture Show.com web site in 1998 which is still my core business today. At the time, Album Cover Art was my hobby, as I was an independent investment adviser, with my office being one street over from a Goodwill. I sold that business in 2003 and have committed to growing Rock Art Picture Show since then, working with organizations including the Smithsonian, the Rock & Roll Hall of Fame, Graceland, Sony, Warner Brothers, Capitol Records, Sirius XM, the Hibbing Minnesota Library (on Bob Dylan’s birthday), colleges and institutions to display album cover art, as well as the thousands of individual customers who’ve shopped on my site.

My original record collection reflects the financial realities of first being a teenager and then a married college student. Once I started collecting, I put ads in the local papers as a vinyl junkie and purchased several private collections and supplemented that by my frequent Goodwill trips where eventually I established an “understanding” of my needs with the store manager. As a “serious” collector, I’ve gone to record shows in Austin and elsewhere for rarer finds.

I have never sold anything from my record collection, although I have  created a Vinyl Gallery on my web site where I display records I purchased to frame and re-sell, but I have the first albums I bought, Dylan’s Bringing It All Back Home and the Stones’ Aftermath.

For thirteen years, up until just recently, I had a source for purchasing album covers without records. As I view myself as a vinyl preservationist, the idea that these pieces of art were being recycled was something I could not allow and I am proud of the thousands of album covers I prevented from being destroyed. I have a storage garage, shed and garage filled with boxes of what I regard as wonderful, artful representations of social history.

Another project I’ve invested a lot of time in has to do with getting the U.S.P.S. to issue a series of album cover art stamps. I received the approval for my proposal to the Postal Service for such a stamp series in 2008. They took a step in that direction as they have recently released a Jimi Hendrix-themed stamp of which a full sheet looks like a 45 RPM picture sleeve. I have a petition on VinylRecordDay.org urging the post office to produce a full stamp series, and so far there are a couple hundred signatures there, but I would like more before I submit the petition. 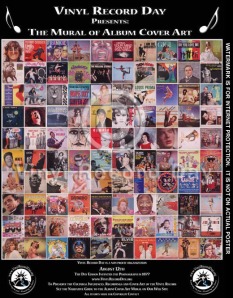 Also in support of Vinyl Record Day, I have created the “Mural of Album Cover Art”, a poster featuring one hundred album covers, and wrote an accompanying narrative guide that gives background information on each one of the covers. This is another way I figured would be a good representation of the art form, but it is certainly not a “definitive collection” of album covers, as there is no such thing.

To summarize, I got involved with preserving vinyl because of my concern of preserving our audio history and my fascination with Album Cover Art. It’s been 16 years and I still find cover art and audio history something I care very much about and I am very pleased to have seen the resurgence in the interest in vinyl records over the past ten years.

For more information on Gary (and his products), please visit www.RockArtPictureShow.com and www.VinylRecordDay.org for details about both organizations. To watch an interview with Gary about vinyl preservation, follow this link – http://youtu.be/H_N0jGHraHk