Featured Album Cover Fan Collection – Conrad Swartz, about his covers for The Insanitizers

Some of you may recall an article I’d written a couple of months back about Pozzie Mazerati’s “Red Arrow” campaign, which came about as a result of a posting I had done on the Musicpage.com web site looking to feature the personal album cover art collections of folks in the music business. I thought that it’d be interesting for my readers to learn more about how musical acts use album cover art to help promote their music and their “brands”, and so when I received a note from Conrad Swartz about the sources for the artwork he used on the covers of his own recordings (as part of a surf guitar band named “The Insanitizers”), I thought that I’d once again expand the definition of what I was looking to include in this site’s “Featured Fan Collections” section to show you the works Conrad used to create the eye-catching covers for his albums.

Since one of our stated goals here at the Album Cover Hall of Fame is to provide music art fans interesting and inspiring stories about album artists, album cover art and the roles that design and image-making have in the marketing and packaging of music today, I think that you’ll agree that Conrad’s covers are great examples of one artist being moved by the creativity of others. I asked Mr. Swartz to give us some of the specifics about each work of art that is featured on his covers and so, in his words, here are the details:

Thanks for taking a look at my collection of artwork. I used several paintings hanging in my home for the cover art for two recent surf-rock music CDs featuring music by my own band called “The Insanitizers”. I bought these paintings from the artists who created them – here is a little more information about this art and the artists who made them.

For the CD titled Whimsical Surf (and its replacement, called Whimsical Surf Version 2), the front cover and CD were based on a painting by D.R. Mullins of Bristol, Tennessee. I bought his large painting called The Hillbilly Hindu and the Zen Baptist from him when I visited him in his studio. I had seen this painting when I visited the art museum on the campus of East Tennessee State University in Johnson City, where I was on the psychiatry faculty. I enjoyed its humor and was impressed by the skill, pleasant balance, jolly colors and attention to detail. This was back in 1997, before I had started writing and recording music.

Leaning against the wall of Mullins’ large one room studio was his bass guitar. In response to my interpretation of the apparent symbolism, he agreed that the hillbilly string instrument player in his painting represents him. On another wall of his studio was a huge geographic illustration he was painting on commission, representing a region of the state of Tennessee. In view of the psychedelic images in the painting that brought me there, I had expected Mr. Mullins to have been an adolescent in the 1960s, as I was, but he was actually younger than that. Speaking to him many years later, he said (in his very deep Tennessee accent) that this was a perfect use of his painting, mentioning that this painting shows the first appearance of a Hindu character that would appear later in many of his paintings. 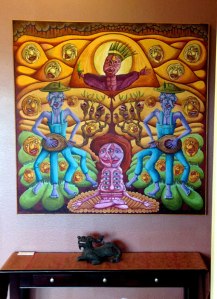 (D.R. Mullins – The Hillbilly Hindu and the Zen Baptist)

Since I purchased it in 1997, Mr. Mullins’ painting has hung on a living room wall in all the homes I have lived in, in Tennessee, Missouri, Illinois and now Washington state.

In 2010, I produced a CD of light-hearted rocking instrumental surf guitar music. As I felt that my involvement with music was primarily about having fun, it seemed natural to call the CD Whimsical Surf and use Mr. Mullins’ painting as the underlying art for the front cover and the CD disc.

A few months before this CD was finalized, while on an “art walk” exhibition in Portland, Oregon, I noticed a dramatic, colorful painting by artist Sally Sherwood. Besides its prettiness, there was a space in the upper left quadrant of the painting that seemed natural for a track listing. On the right was a tree with a bird at the top, and underneath lay a girl in dreamy repose. I bought a print of the painting from the artist which, indeed, served my purpose well. Today, the print hangs on the wall of my den.

On an inside cover of this CD, I included an image of a portrait of me holding a star-shaped guitar surrounded by surf creatures, painted by my wife Cynthia Heise (many of her artworks are intended to be humorous). The original hangs on the wall of my music studio. Cynthia is a member of the Northbank Artists Gallery cooperative, located in downtown Vancouver, Washington. She regularly contributes to art exhibitions in Vancouver and she is an (unpaid) elected member of the Board of Directors of the Arts of Clark County, Washington. 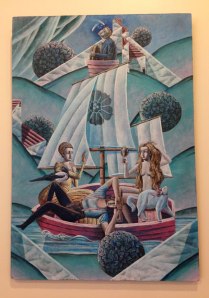 (Devin Bernard painting – The Voyage of the Narcissus)

In 2013, for the primary underlying art on my second CD, I chose a painting titled The Voyage of the Narcissus by Devin Bernard, a Portland artist that my wife and I had met several times. Mr. Bernard was primarily a commercial illustrator, but he had made many paintings for sale. To add a bit of intrigue to the story, shortly after Mr. Bernard sold me the painting, he and his wife moved to Costa Rica to run a farm, raising fruit.

I first saw the particular painting hanging in a show at the Northbank Art Gallery. To me, it seemed mysterious and attractive. It discreetly showed feminine beauty and it had a surf-related theme, showing a boat on water. For the CD art, I excerpted sections of the painting, with the lower-middle section used on the front cover. 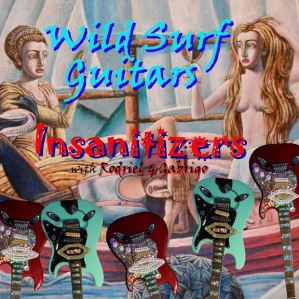 Because the title of this CD is Wild Surf Guitars, I wanted to portray “wild” guitars on the front. Moreover, since the painting primarily depicts four people isolated in thoughts of themselves and this was not particularly relevant to my music, I decided to make a collage consisting of photos of guitars I had modified, layered on top of Mr. Bernard’s painting. I copied and pasted images of guitar parts on top of these guitar photos so the guitars would appear to have real “faces”. In the manner of wild dolphins, these wild surf guitars are sticking up from the water, grinning. 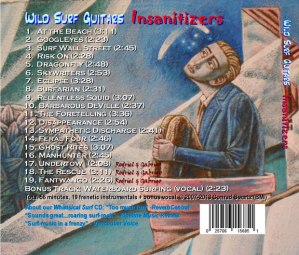 For the back cover, which includes the track listing of the music on the CD, I selected an upper portion of Mr. Bernard’s painting, choosing the section so that the man sitting in an impressionistic crow’s nest regarding the stars is on the right. This balances the track listing on the left.

For more information on Conrad and his band The Insanitizers, please visit his web site at